The Red-knobbed Coot (common name Crested Coot)
Family: Rallidae (Rail and Crake family)
Species: Fulica Cristata (Fulica is Latin name for “Coot” and is a close relative to the Moorhen)
Length: 38 to 45cm (15 to 18inch) Wingspan: 75 to 85cm (30 to 33inch) Weight: 600 to 900gms
To visibly separate this species from the Europe and Asian Coot where they share habitats. There are two tiny red knobs at the top of the facial shield, which are not easy to see at any great distance and are only present in the breeding season. The black feathering between the shield and the bill is rounded, whereas in the “Eurasian Coots” it comes to a point; also, the bill has a bluish grey tinge. When in flight, the red-knobbed coot lacks the white trailing edge to the secondaries as of the “Eurasian coot”.
The juveniles are paler than the adult Coots, having a whitish breast, and lacks the facial shield; the adult's black plumage develops when about 3–4 months old. The white shield is only fully developed after a year.
The Crested Coot is resident in the most Southern part of Spain and across most of Africa on freshwater lakes and ponds.
Habitat: Usually easily seen, unlike many “rails” swimming in open waters, preferring shallow vegetated Lakes, large ponds, flooded pits and reservoirs with a good growth of vegetation and overhanging branches along the edges of the waterline.
The Coot is a good diver to feed underwater and is an omnivorous feeder, feeding on most water vegetation including the roots, seeds, fruits, grasses. Feeding also on small rodents, amphibians, like tadpoles, snails, fish and similar aquatic species. However, the bird’s main food in most waters are various fresh water plants such as the species of Potamogeton, for which it commonly dives to feed from.
Will become aggressive in the breeding season towards other Coots that enter within its set territory, usually by raising their wings and body feathers is enough but can become aggressive sometimes if the display does not deter. They will also be aggressive to other water birds much larger than themselves.
Nesting: Large bowl-shaped nest of wet vegetation nestled in overhanging branches or wedged in reeds, also on semi-floating mounds of various vegetation waste at the water’s edge. One to two broods containing between six to nine eggs, April to August.
Many chicks die of starvation, coots can be brutal to their own young when there is a lack of food, in some cases will even attack their young when begging for food. The young will eventually give up begging and die. The coot may eventually raise only two or three young chicks out of nine hatchlings.
Voice: This is a noisy volatile bird during mating season, just like its Eurasian cousin; although the vocalisations are quite different. It gives a fast "kerrre" like the little crake, a harsh "ka-haa" and also a grunting "oot, oot"
Read More 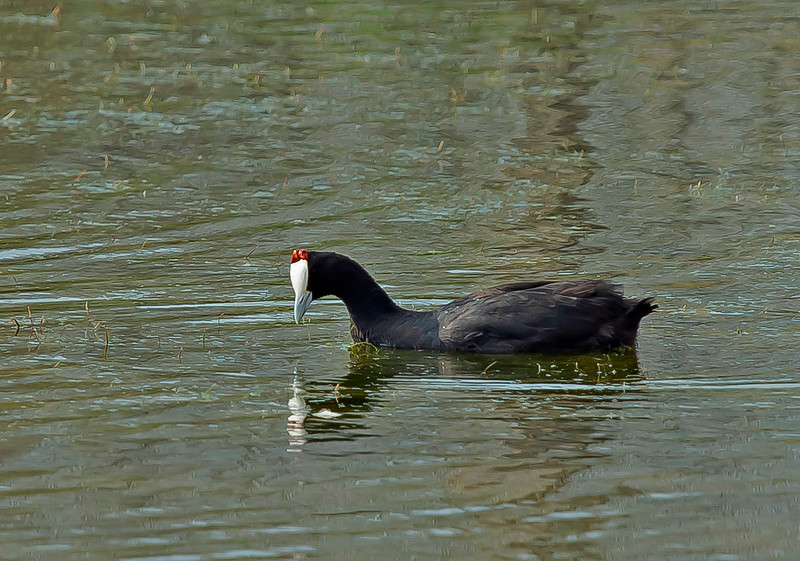