Thymelicus sylvestris (Poda, 1761) commonly known as “Small Skipper”
Family: Hesperiidae
Wingspan: 27mm to 34mm.
Flight season: June to October.
The Small Skipper is widespread on the British mainland and as far north, as Northumberland. Absent in Ireland, the Isle of Man and the Channel Islands. Can also be found over much of Europe, south as far as North Africa and across to the Middle East.
Thymelicus sylvestris appears mainly in high summer, spending much of their time basking or resting among vegetation. they are agile flyers, manoeuvring expertly through tall grass stems.
Habitat: Favours any open areas with tall grass stems like mature meadows, rough grasslands, unkept road vergers, forest and woodland edges. The Small Skipper lives in colonies in both small and large populations.
The male is distinguished from the female by the dark markings (sex Brand) in the centre of its forewings.
The female lays her eggs inside the sheaths of various grasses from July to August. Before hibernation, the newly hatched caterpillars eat their own eggshells for nourishment. Each caterpillar stays in a protective cocoon of a grass sheath, sealed with silk. The adults first appear on wing towards the end of June.
The “Small Skipper” favours grasses such as: Yorkshire fog (Holcus lanatus), cock’s foot (Dactylis), meadow foxtail (Alopecurus pratensis), timothy (Phleum pratense), Favoured flowers are mainly purple in colour, being thistles and knapweeds.
Read More 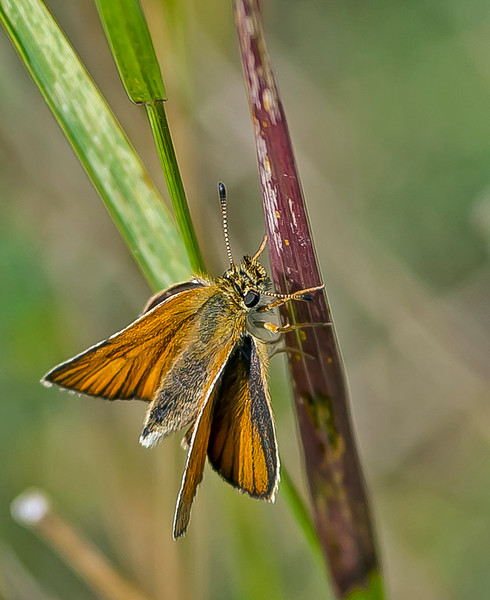